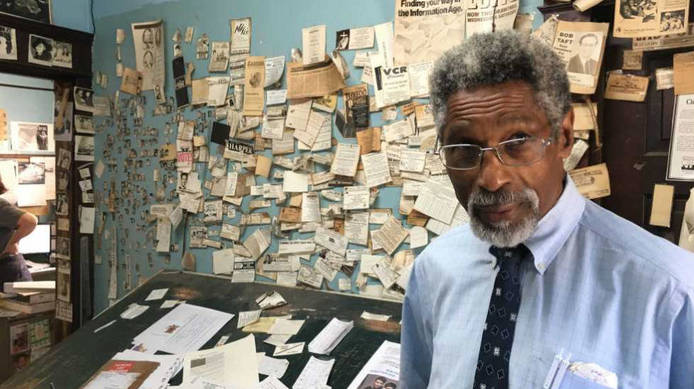 Ulysses Glen, in front of a wall of archival photos and articles, has been the owner and publisher of the East Side Daily News since 1980. [Justin Glanville / ideastream]

Walk into a post office on Cleveland’s East Side and ask for a copy of the East Side Daily News, the newspaper that covers the East Side of Cleveland and some of its eastern suburbs, and you're likely to get a head shake from the desk clerk.

"If you’re not here the day they put 'em out, they’re gone," she says. "The customers take them."

The idea of people clamoring for copies of an old-fashioned newspaper — the kind with ads and comics and ink that smudges off on your fingers — goes against so much of what's reported these days about the death of print journalism: that daily publications are laying off reporters and shrinking their coverage, unable to compete with online news and classified ads on the Internet.

But the East Side Daily News is celebrating 40 straight years of publication as of this summer. According to its owner and publisher, Ulysses Glen, that longevity is due to hard work and the paper's dogged pursuit of local stories and voices.

"The important thing is that you cover news that no one else covers, and you're giving people a voice in the community," Glen says.

On a recent weekday, Glen sits in a cramped upstairs office on Woodland Avenue near E. 114th Street. The paper has operated here since July 1980, on the bottom two floors of a storefront building Glen owns. He's dressed in a light blue shirt and tie. He alternates between answering phone calls and talking about a story with his single employee, reporter/editor/layout artist Pat White.

The front page of the newspaper's first edition from July 1980, when it was called Ascensions News. Glen changed the name because he thought it sounded religious. [Courtesy of Ulysses Glen]

Layers of old political campaign posters and articles cover the walls around them — a museum-worthy display of 40 years of East Side history. Here, too, are flyers and photos of Cleveland boxing memorabilia from Glen's personal collection.

But this place isn’t all about the past. At 72, Glen still publishes an online edition every week and in print once a month. Recent editions have covered everything from serious stories of people whose relatives believe they were wrongfully incarcerated to movie reviews and a column about jazz music. 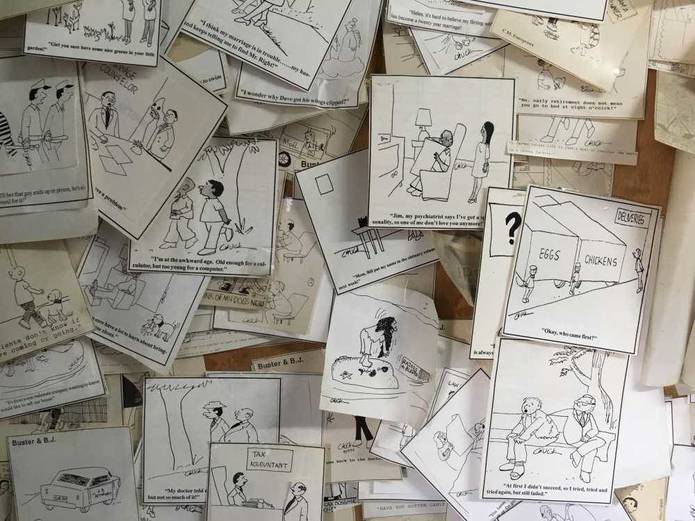 Glen says when he was first getting started, people in the surrounding neighborhoods didn’t know what to make of him: this former journalism professor and freelance reporter who moved into an old barbershop and started printing news about them.

It helped, he says, that he lived on the third floor of the building — and still does.

"Just by us being in the neighborhood, people can trust us a little more," he says. "They could just walk up to our door actually you know knock on the door say, ‘Hey I got some information or a story or something happened.’" 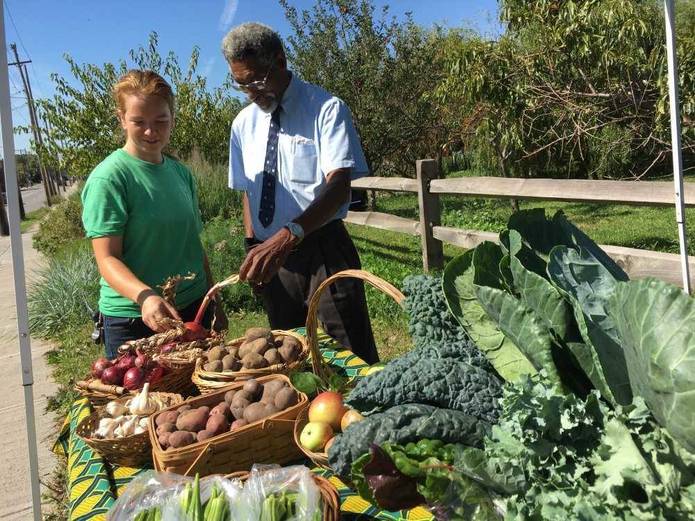 Glen talks to Hollie Baker, who works at a produce stand across the street from his office. [Justin Glanville / ideastream]

Another way he’s built trust, he says, is by showing both the bad and the good about areas of the city that are used to seeing themselves portrayed as chaotic and dangerous in mainstream media.

"There are people who live in those communities who are hard working," he says. "They want to make sure that you weren't just gonna put negative stuff in the paper."

It’s not that he shies away from the bad stuff. But articles about crime and vacant buildings run alongside interviews with local musicians and artists and just regular people.

A column called Kids Korner runs at the top of every front page, featuring a photo and some facts about a local kid. And the paper doesn’t charge for obituaries, so anyone, rich or poor, can honor loved ones.

It's that hyper-local orientation that's allowed community papers to survive in an era when bigger, daily papers have struggled, says Loren Colburn of the Association of Free Community Papers. 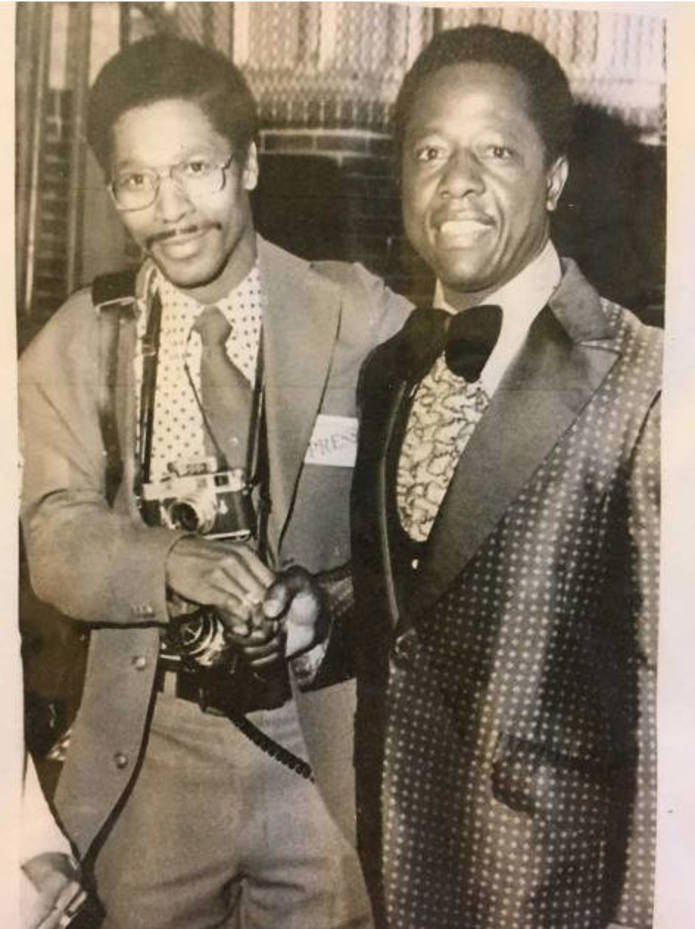 "If you're looking for what's going on with your local school board or who's got the best pizza deal next Friday night, that's the kind of stuff that [community papers] are the only source you can come to find a lot of that," Colburn says.

The AFCP sends an email newsletter to about 1,700 community publishers — about the same number as ever, he says. Parents of small children are especially avid readers, he says.

"[Community papers] are the only source for information about schools, or if it's your kid who scored the winning goal at a soccer game," he says.

Cederic Williams, a neighbor across the street at the Woodhill Homes public housing development, grew up with the paper.

He was a teenager when the newspaper first got started, and he was such a fan he’d ride around on his bike, tossing copies to neighbors.

"We used to call him Mr. Neighborhood News," he recalls, smiling. 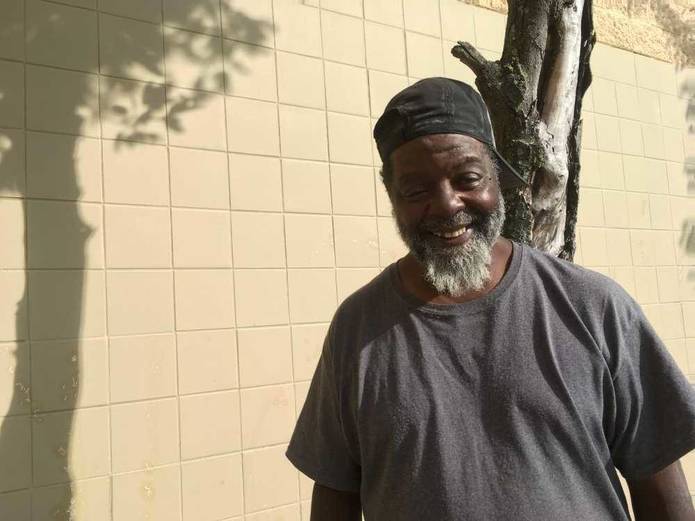 Cederic Williams of Woodhill Homes has been a fan of the newspaper since its founding. [Justin Glanville / ideastream]

Local news coverage by a local resident means a lot in a place like Woodhill Homes, where people can feel invisible because of the stigma around public housing, he says.

"No one don't even know we exist, that little community right there," he says. "No one knows we exist unless something bad happens. He is the only one, who gets the news out to the neighborhoods."

Glen says he doesn’t have any firm plans to retire.

But lately, something new has been appearing in the local ad section. A notice, in block letters on page three: “Newspaper for Sale.” So far, there haven’t been any takers. But Glen says for someone hard-working, and passionate about community — it’s a good living.