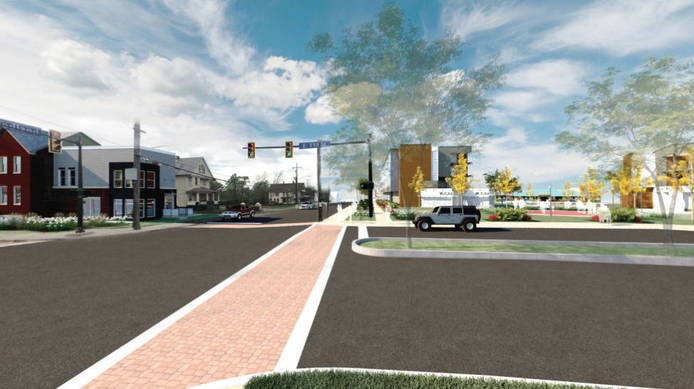 An architectural rendering shows a concept for the intersection of Woodland Avenue and E. 110th Street. [City Architecture]

The effort to rebuild and reinvigorate Woodhill Homes, a public housing development one mile south of Cleveland's University Circle, marks a big milestone August 28, when the Cuyahoga Metropolitan Housing Authority (CMHA) submits a draft plan for the public housing estate to the federal government.

The plan is an important step toward getting funding to entirely replace the 1940s-era buildings and put an end to residents’ struggles with 80-year-old bathroom fixtures, broken locks and doors, and steep stairs that aren’t accessible to wheelchairs.

CMHA’s plan calls for 1,000 new units of housing to be built not just on the Woodhill site itself but on city-owned vacant parcels nearby: 500 affordable units to replace the existing public housing units, plus 500 market-rate units. The affordable and market-rate units would be visually indistinguishable from each other. A new street grid would better connect the Woodhill site to the surrounding neighborhood, and new parks would provide space for playing sports and picnicking. A variety of programs and social services would be offered to help improve residents' lives.

HUD is expected to decide who gets the grants in spring 2020.

Who Created The Plan?

CMHA led the process, working with a team of consultants and designers. City Architecture, a local architecture firm, ran the design portion. Case Western Reserve University surveyed residents about existing problems in the neighborhood and what they wanted to see in the future. About 20 public meetings were held to get input from residents at Woodhill and in the surrounding neighborhood.

Why Does The Plan Encompass The Surrounding Neighborhood?

HUD wants to fund plans that it deems likely to lift up people and neighborhoods, not just the buildings of the housing estate itself.

Indigo Bishop of CMHA said the reason for this comes from learning from mistakes that have been made in previous efforts to rebuild public housing.

"They used to only focus on a specific low income housing site," Bishop said, "but found that investing millions of dollars in just that specific location was a good way to improve the four walls around which people live, but people's lives is really impacted by many more things than housing." 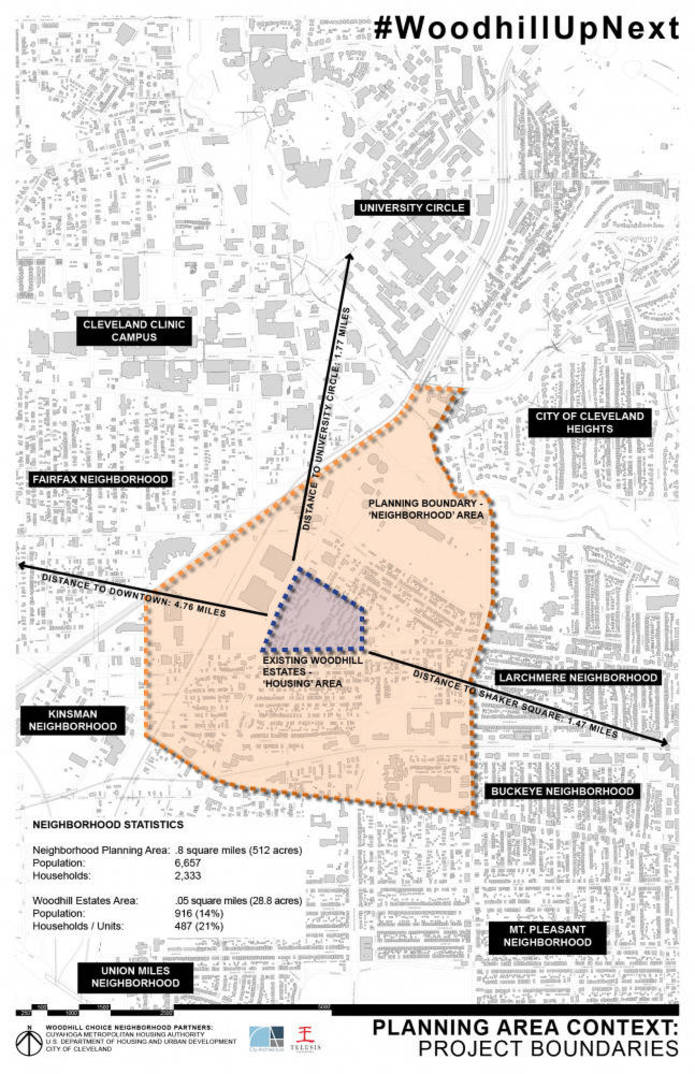 A plan shows Woodhill Homes (center, in blue dotted line) and the wider neighborhood that the plan affects (orange dotted line), in relation to other areas in Cleveland. [City Architecture]

What Are Specific Recommendations for Improving People's Lives?

There are dozens: everything from creating new workforce development programs, to having support meetings for people who’ve experienced trauma, to running cultural sensitivity trainings for police officers, to moving bus stops so they’re more convenient for residents.

Many of those ideas are well outside the purview of what CMHA or any public housing agency could reasonably offer on its own, but Bishop of CMHA says they’re feasible through partnerships.

"Throughout the planning process, we've been engaging with close to 50 organizations and close to 200 individual partners to help brainstorm some of these solutions with residents," Bishop said. "They'll also help bring them to life during implementation."

One of the most important partners outside CMHA itself is the City of Cleveland, because it owns most of the empty lots nearby through the city land bank program. CMHA is also working with the Greater Cleveland Regional Transit Authority, the Cleveland Police Department, and several large local foundations.

It tends to work best in neighborhoods where there's already a strong housing market. Tremont Pointe, in the gentrifying Tremont neighborhood, is a public housing estate that was redeveloped about 10 years ago. It has both market rate units and low-income units, and they’re all renting well. The area around Woodhill has low property values now — largely due to the practice of redlining — but CMHA feels optimistic that that could change because there’s a lot of investment happening around Woodhill. For example, the Opportunity Corridor road project is under construction, and there are a few other private housing developments nearby. The City of Cleveland is also spending a lot of money through the Mayor's Transformation Initiative to build up Buckeye and Woodland roads.

What Do Woodhill Residents Say About Rebuilding Their Neighborhood?

Many residents say they’d welcome a rebuild. Torrie Goodman, an eight-year resident who also serves on an advisory panel to the plan, believes rebuilding Woodhill would be good for the whole area.

"The atmosphere in this neighborhood, it wrinkles," he said. "It's not flourishing. So if you could change starting from [Woodhill] — because honestly this is the middle of the bowl — if you can change this and branch out, I guarantee you you could change a lot of things around here."

But some people feel nervous about what would happen to them if the plan goes through. They would have to move, probably for at least a couple of years, while the construction is underway.

CMHA says it would give everybody the option to move back if they want to, but people’s lives can change a lot in a couple years. In previous public housing redevelopments, many original residents didn’t end up moving back even if they had originally wanted to. A 2006 study of Carver Park, a housing estate that was rebuilt about 15 years ago in Cleveland’s Central neighborhood, found that only about a third of the original residents ended up moving back when it was done. 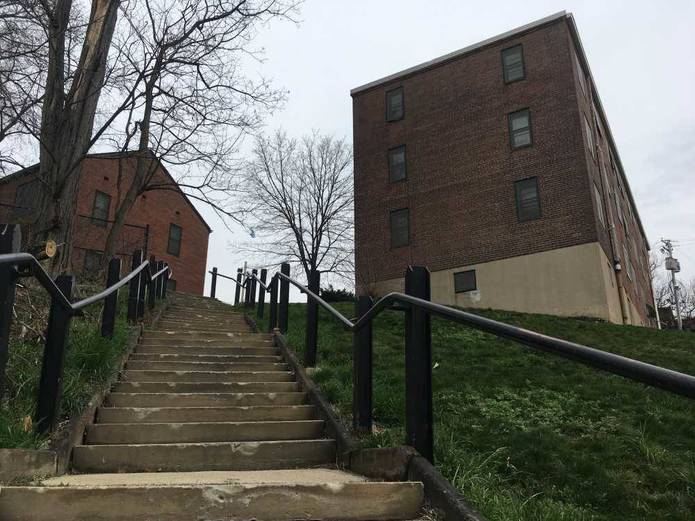 What Happens If CMHA Does Not Get Funding?

Officials at CMHA say they’re committed to doing major renovations at Woodhill even if they don’t get the grant. How they fund those renovations is an open question. It could be through a mix of direct HUD funding, bank loans and tax credits.

This story is part of a two-year reporting project about the past, present and future of Cleveland’s Woodhill Homes public housing development.